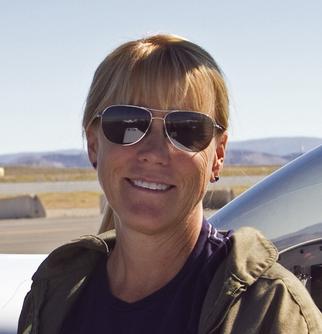 Born and raised in California, Vicky Benzing is an accomplished pilot, skydiver, aerobatic performer, and air racer.  With more than 9000 hours of flight time and over 1300 parachute jumps, Vicky has a passion for everything airborne.  Her flying career has spanned more than thirty years and she currently holds an Airline Transport Pilot rating as well as a commercial rating in helicopters, seaplanes, and gliders.

Vicky still remembers her first flight in her uncle’s airplane when she was just a small child.  Inspired by that flight at a very young age, Vicky learned to fly in a family friend’s antique Taylorcraft in her hometown of Watsonville, on the California coast.  She was thrilled by the spins, loops, and rolls that her ex-military instructor taught her and subsequently took aerobatic instruction from legendary pilot Amelia Reid.

Vicky’s aerobatic flying took a brief back seat while she earned her PhD in Chemistry from UC Berkeley and began working in the Silicon Valley high tech industry.  But her passion for spins, loops, and rolls soon returned when she took an aerobatic flight with air show legend, Wayne Handley.

In 2005, Vicky began her aerobatic training in earnest.  She started competing in aerobatic contests throughout the US, working her way up through the many categories. In between contests, Vicky also began performing in local air shows.  Today Vicky holds a surface level aerobatic waiver and has flown over 200 air show performances at venues across the United States, including performing at the largest airshow in the world, EAA AirVenture in Oshkosh, WI.

In addition to aerobatics, Vicky got the racing bug when a friend invited her to “come play in my sandbox” at the National Championship Air Races in Reno, NV.  That year, Vicky was chosen “Rookie of the Year” after winning her first race ever.  She currently competes in both the Sport Class and the Jet Class, and in 2015 Vicky set a record as the “Fastest Woman Racer” ever in the history of the Reno Air Races when she qualified a one-of-a-kind L-139 jet on the race course at 469.831 mph.  Vicky is currently serves as an officer of Racing Jets, Inc.

​Adding to her flying resume, Vicky can be seen flying her beautiful boeing stearman in the documentary film “Mercury 13” which is currently airing on Netflix.  her Other film and television projects include an episode of “Ice Pilots,” an episode of “NCIS LA,” and extensive stunt work in her Stearman for the short film “Niner Echo Foxtrot.”