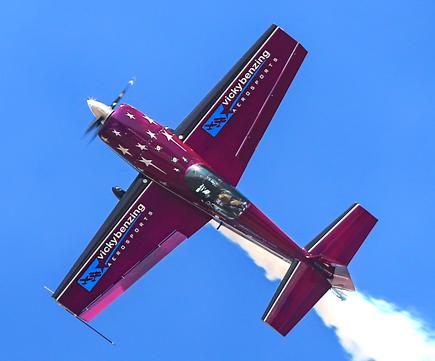 ​Vicky’s beautiful monoplane was designed and built by Extra Aircraft for use in world level aerobatic competition.   It is capable of +/- 10 G maneuvers with roll rates in excess of 400 degrees per second and has a top speed of 250 mph.

Originally licensed in Germany, this particular airplane was imported into the United States in 1997 and has been flown by some of the world’s finest aerobatic competitors.

In 2000, this airplane was purchased by air show performer Rocky Hill who flew it at air shows all over the country. The airplane quickly became a favorite of fans and was also a favorite ride for air show legend Wayne Handley.

In 2007 vicky acquired the airplane from rocky.   After adding a new custom candy paint scheme and a new engine, Vicky began to fly her own dazzling aerobatic performances at airshows up and down the West Coast.

Powered by an experimental high performance Lycon-built 540 cubic inch engine and a Hartzell “Claw” propeller this single-seat carbon fiber monoplane is both nimble and powerful, making it perfect for Vicky’s unlimited aerobatic maneuvers.     ​